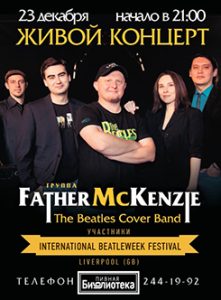 During its six-year history of the band Father McKenzie successfully performed in clubs in different cities of Russia, constantly and actively engaged in concert activity, expanding the scope of its repertoire and the geography of performances – in 2017, the band became the first and only band from the South of Russia, which took part in the Beatles festival in the UK (Liverpool).

Only Father McKenzie repertoire of over 100 songs of The Beatles (and solo Beatles) as early rock-and-roll, and later experimental work.